Please grab your coffee ☕ and stick with me for another five minutes. I’ll make sure that you receive something meaningful from our conversation!

So, here I’m- (Moby dock 🐳), talking to you about Layers in Docker and here’s our agenda:

Introduction: If you know me and what’s on my dock- please skip this!

Docker offers a simple way to package an application and its runtime dependencies into a single container; it also provides a runtime abstraction that enables the container to run across different versions of the Linux kernel.

When you compare VMs (Virtual Machine’s) with Docker, the advantage is you can quickly grab the specific parts you require. It’s like putting together the different pieces you need to create the perfect app to your specifications- no extra weight.

Docker images: do you know, they have their own pieces?

The first time when you pull an image from Docker Hub, you’ll have to wait for each pull to load. As you can see in following example- it has loaded 4 separate layers for Ubuntu image.

The second time, magic does the trick and it will not load all those layers again. 🤡

Docker images contain read-only layers, which means that once an image is created it is never modified.

🚀 No no, it’s not rocket science- it just has some math behind to reuse space.

I love this pizza analogy by Chloe Condon from codefresh.io and would like to use the same:

🍕 Let’s say we had a cheese pizza. We have a base layer of dough, tomato sauce, and cheese. Then I decide I want to have half of my pizza with pepperoni with it.

Would I bake another pizza from scratch, make new layers, and add pepperoni to that one?

Of course not! I’d just add a layer of pepperoni to half of my existing pizza. No need to go through the trouble of making a whole new base pie. As we make more changes, we create more layers.

Following are two figures that should simplify things:

Figure 1 shows an example of a container image- Ubuntu base OS. The image is a composition of four base Ubuntu layers. 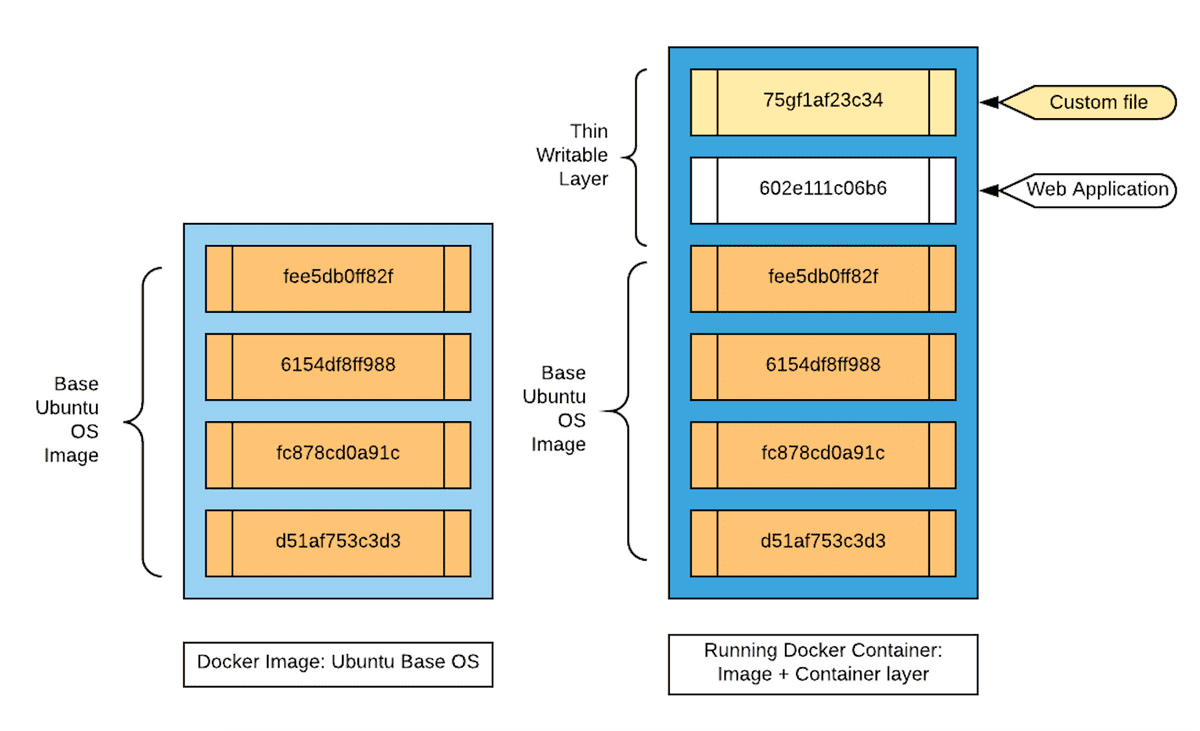 In other words, a running Docker container is an instantiation of an image.

Note: The default docker images will show all top level images, their repository and tags, and their size.

We will assume for the sake of example assume that, each image adds one layer (not add confusion with intermediate layers, for now).

Let’s verify it with docker info as well:

Alright, so this is telling us that we have 2 images on my machine and for sake of simplicity we take that as 2 layers. Great stuff!

As always, we have our FROM instructions first. We’re gonna be basing this new image on ubuntu. We have got 2 RUNs and one CMD instruction.

Now, we could do something to take care of the number of layers our docker files create and one of them is to write effective RUN instructions.

The RUN instruction is not optimized here although, I’ve listed them in 2 lines for sake of simplicity. More could be read in the last section of this article. link here

We are about to build an image from this dockerfile. How many layers do you think this will add overall, as well as to the layers on top of ubuntu base image?

Let’s do a docker build and see!

Here, overall 4 layers has been added:

📝 Note: It shows creation date for Ubuntu layer as 10 days ago, because that’s the official date when the image was updated on. (https://hub.docker.com/_/ubuntu/)

So, we have a total of 6 images now, that is addition of 4 to the already existing 2 images we had.

Reducing the Number of Layers in an Image:

As discussed earlier, one important thing about writing Dockerfile is to take care of structure in which you mention the instructions as well. One of the ways to reduce the layers in the above Dockerfile example, would be to append and re-write the RUN command in an effective way.

This was a quick read on layering, and hence if you want to read further on optimizing things. I’ve mentioned few links at the end of article.

One reason Docker is so popular is that it delivers the promise of “Develop Once, Run Anywhere!”

📓📓 To recap- the layered file system allows multiple images and containers to share the same layers. And gives us following major advantages: